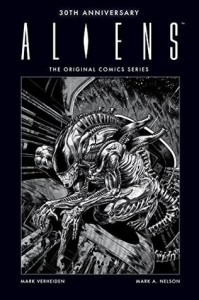 ... but I should have. Instead I have watched the movie Life. If you don´t know that movie, it´s the one were Ryan Reynolds, Jake Gyllenhall and others are acting like complete morons, even though they are supposed to be scientist. These idiots picked up an ancient life form from Mars, whose main objective is to kill them all (and to get to earth). Due to the stupidity of the astronauts / scientist and the survival instict of the alien, all hell breaks loose on the ISS.

Honestly, I cheered for the alien, which is so wrong because it was so boring and non-threatening. The people in this movie were just so dumb, I was on the verge of throwing stuff at my tv and don´t get me started on the ending. I hated the ending.

Coming back to the one and only Alien, the real deal, threatening in all it´s glory. I´m reading the graphic novel for the halloween bingo. The story takes place after the event of the James Cameron movie Aliens, Newt and Hicks have survived and are forced to go after the Alien again. I´m about halfway through and I´m enjoying the story and the artwork with its drawings in black and white.