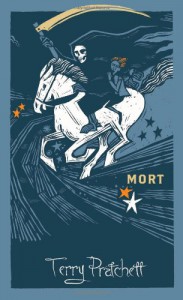 This book being the first book in the Death subseries, there is not enough Death in it. Instead we are following Mort, newly appointed apprentice to Death, who does a splendid job in messing up in reality, as far as reality can be messed with.

Unfortunately, Mort isn´t a character that I particularly liked or that I could root for. And all the other characters weren´t anything special either and the story wasn´t compelling or funny enough that I ended up loving this book.

Which leaves me with the best scene this book has to offer: