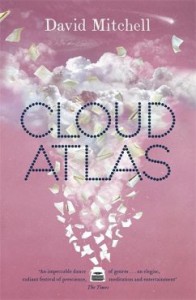 After YouKneeK posted her review and having a lively discussion with her about the book (and the movie), I realized that I was fuzzy about the details in the novel. A situation I couldn´t tolerate. A reread was required and I ultimately did it. And it was a great experience.

It is hard to say something about the story without giving away too much. There are six different stories, told by six different narrators: a lawyer in the midst of the 19th century, a composer in 1931, a journalist in the year 1975, a publisher in the beginning of the 21th century, a genetic clone in a near future and a goat herder in a post apocalyptic setting. The common denominator for these six people is their struggle for humanity, their personal freedom and how their decisions influence other people along the way.

What makes this novel extraordinary is its structure and all these connections that run through the narrative. Some of these connections are obvious, others are more subtle and especially the latter ones are harder to catch and they justify to actually read this novel for a second, third or fourth time. I got a different insight into the novel reading it for the second time and it was easier for me to relate to the characters this time around (I especially struggled with the Cavendish and Zachary chapter the first time I read the book).

I adore this novel and the message that the story conveys. Cloud Atlas is one fabulous piece of storytelling. A favorite of mine and I can highly recommend it.

I´m putting some of my thoughts behind a spoiler tag. If you haven´t read the book you shouldn´t be looking here, because there are some major spoilers ahead: