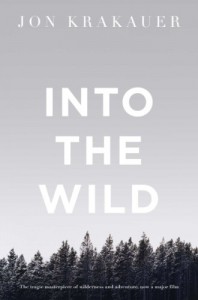 Whew, I did it. I finished this book and it feels like it took me ages to finish these 200 pages (ultimately it took me eight days to finish it).

It´s the story about Christopher McCandless who has gone into the Alaskan wild "to live of the land" and died four months later of starvation. So the story of Chris McCandless is a sad one but I just couldn´t feel sad for him. I´ve got the impression that McCandless has been a selfish and arrogant person, who thought that he could go into the wilderness without any preparations whatsoever and that he could survive by merely killing some game and eating a few berries.

Krakauer tries his best to explain the reasoning behind McCandless´ actions and he is clearly of the opionion, that McCandless isn´t a nutjob who didn´t know what he was doing. I have to give him credit for that. But I still think that McCandless had a slight streak of madness about him (the fact that he calls himself Alex Supertramp on his journey didn´t help me change my mind about his mental state).

I´m not going as far to say that this book is bad but I just couldn´t relate to McCandless at all which probably made it that tough a read for me. And now I´m just glad that I finished it.