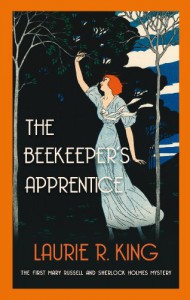 The Beekeeper´s Apprentice tells the story of 15 year old Mary Russell, who one sunny day stumples upon Sherlock Holmes. Holmes realizes right away that Mary has a knack for deduction and he takes it upon himself to take her on as an apprentice.

This is the first book in the Mary Russell & Sherlock Holmes series, so this is mainly about the teaching of Mary Russell and how she becomes a full fledged partner of Holmes. The novel comprises of a variety of cases that needs to be solved, some minor ones in the beginning of the novel and a major, life altering one in the second half of the book.

I actually enjoyed the first half of the book. It was an engaging read, I like the authors writing style and the cases were quite clever. I even liked the characters in the beginning, even though they were overly clever and perfect and thus a tad unrealistic.

If Laurie R. King would have kept her narrative along these lines, this could have been an ejoyable story and I would have liked this book. But then I had to read two chapters that really ruined this novel for me. I´m not a Sherlock expert and I have never read a Conan Doyle novel before, but there are some things that rubbed me the wrong way.

(A little warning: I´m going to qoute some passages and there are some mild spoilers ahead. So if you are planning to read this novel and you don´t want to get spoiled, you shouldn´t read any further)

At a certain point I began to dislike Mary. She is a Mary Sue. She is so special, so perfect, so clever, everybody likes her and the author constantly reminds us, how superior she is compared to Watson. Even when she displays some reckless behaviour and endagers a child, she gets a pat on the back by Holmes and everything is okay. I would have grounded her!

And of course Holmes, Mycroft and any other middleaged man in this story aren´t immune to the feminity of our heroine. It´s 1916-1917 and a teenage-girl is travelling with a middleaged man. If that doesn´t raise some questions, then I don´t know what. But it´s not that big an issue in this novel, because everytime someone frowns upon this and makes a remark, he gets an evil stare from Mary and everything is okay. What a way to tell a realistic story.

And then there is the thing with Watson and how Laurie R. King treats him. She clearly must dislike him, otherwise I can´t explain all that belittling of his character which is going on in this novel. Watson is described as a dimwitted henchman, who has been more of a nuisance to Holmes than an actual help and a friend.

"I work alone. I always have. Even when Watson was with me, he functiones purely as another pair of hands, not in anything resembling true partnership."

"Watson´s great strength has always been his utter, dogged dependability."

But that is not even the worst thing. Someone tries to blow up Holmes and his friends, so after surviving a murder attempt on his own life he rushes to Mary to save the damsel in this distress. And then happens this:

Mary: Holmes, you said that Mr. Hudson was out of the way, but do you think we should ask Watson to move into a hotel for two or three days, or go visit a relative, until we know what´s going on.

Holmes: My God, Russell, how could I - Mycroft, you´re on the telephone. You talk to him, Russell [...] Oh, if anything has happened to him through my utter and absolute, boneheaded stupidity...

So ... the life of Holmes´ friends are at stake and he forgets Watson. He forgets him! That is just so wrong, especially since the reason for his behaviour is Miss Russell herself:

Holmes: "No, it was a fixation visited upon an abused brain. Reason demanded I stay on the scene of the crime, with perhaps a telefone call to put you on your guard, but I...to tell  you the truth, I found it impossible to retain a logical train of thought. It was the most peculiar side-effect of concussion I´ve ever experienced. At dawn on Tuesday all I could think of was reaching your door by dusk, and when I found I was able to walk - I walked."

Mary: "How odd", I said, and meant it. I would not have thought his affections for me would be allowed to interfere with the investigation of a case, shaken brain or no.

What´s this supposed to be? Holmes in love? No, thank you.

The second half of the book was okay, but somewhere along the way I lost my interest in the characters and the story itself. So I don´t think that I will continue with the Mary Russell series.