Travels with my Aunt 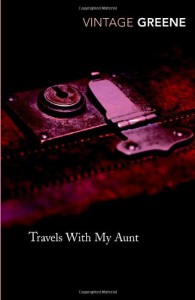 Travels with my Aunt is a fun and enjoyable read about Henry Pulling, a retired bank manager somewhere in his fifties, and how his life gets turned upside down when he meets his Aunt Augusta at his moher´s funeral. All of a sudden Henry´s boring dahlia-filled suburban life is turned into a life of travels with his unconventional aunt, shady characters, pot and the CIA.

Don´t expect an action packed book, because this novel is all about the characters and their relationships with each other. And Graham Greene surely knows how to write some compelling characters. Aunt Augusta could have told her stories for hours, I wouldn´t have cared.

The book is devided into two parts and as much as I enjoyed the first part of the book, Henry coming to grips with his aunt and (more or less) failing at it, I didn´t like the second part that much. The whole South America story has been too unbelievable for my taste and it felt like there hasn´t been a proper conclusion to the story. Besides the little problem that

I had a huge dislike for Mr. Visconti. Aunt Augusta deserved someone better.

My favorite quote by Aunt Augusta:

"I have never planned anything illegal in my life" Aunt Augusta said. "How could I plan anything of the kind when I have never read any of the laws and have no idea what they are?"