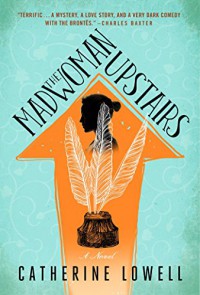 I like the premise of the book. The last descendant of the Brontë family gets entangled in a scavenger hunt for some hidden Brontë memorabilia, which her father supposedly has stashed away for her. A literary scavenger hunt and the life of the Brontë´s combined in one book, that could have been a book right up my alley. Unfortunately I have been wrong about that.

At the beginning of the novel she gets to study literature at the old college in Oxford. And yet she hates authors, every single one of them. A fair amount of the book comprises of her sessions with her tutor and almost every session ends with him being displeased about her (non-existent) knowledge and her attitude. So, if she is not interested in literature and don´t know anything about it, why study it in the first place? And how did she get to study at Oxford university in the first place (without any talents whatsoever)?

Besides being an awful student she isn´t capable of keeping a descent conversation with another human being, as a matter of fact she alienates a lot of people she is having a conversation with. And then she is whining about her not having any friends and being so lonely.

And yet Catherine Lowell manages to squeeze a love story into her book, providing Samantha with her very own Mr. Rochester. Let´s just say I didn´t buy into this love story but at that point I was beyond caring.

Not even the scavenger hunt (with its anticlimactic solution) couldn´t keep this book from being a mediocre read. Not my kind of novel.