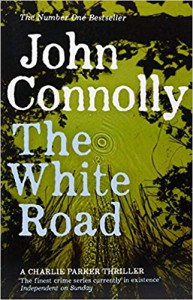 I´m not going to say too much about The White Road, since it´s the fourth book in a series and I would probably spoil plot points if I do so. The only thing I´m going to say is that I liked the third book, The Killing Kind, better than this one. But since The White Road is the continuation of The Killing Kind, both books should be seen as one big story. Which makes this book in any case a difficult one to review.

I will encourage everyone to give this series a chance, though. It is one of the very few book series I happily go back to again, even though I´m a compete failure in finishing up series. And to get the most out of these books, they should be read in order.

What makes these novels such exceptional reads are John Connolly´s almost poetic writing style, the overarching story line, in which Charlie Parker slowly learns his true profession of becoming “the voice and the avenger of the dead”, the supernatural elements, the wonderfully evil characters Parker has to deal with and of course the recurring cast of “good” characters. Charlie, Rachel and his friends Louis and Angel, both hitmen, are so lovely and I like how their witty banter can light up the mood of these pretty dark stories.

One word of advice: these books aren´t for the faint of heart. People get viciously killed, the stories of the victims are heart breaking and especially in the third book, Connolly plays with a specific fear that many people might have.  But these novels are gripping and intense as well and this book series is something special. And I will happily pick up the next book very soon.